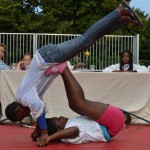 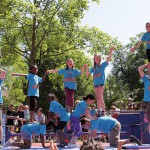 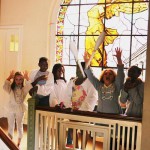 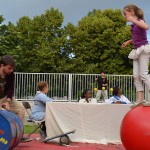 For a long time Cirkus in Motion has been working together with and at the request of the child project Fabota, part of the association Buurtwerk Het Lampeke, in Leuven. This children's project reaches many children who come from socially vulnerable environments and for who connecting with circus is not always easy.

We know from experience that circus works very well with this audience. Although this is a new challenge for many of these children and they sometimes adopt a cautious attitude, during the circus workshops something magical always happens, resulting in a keen interest and making them practice circus acts enthusiastically. Cooperation and physical contact are also not obvious, and yet suddenly everyone is willing to crawl on top of each other to form a beautiful pyramid.

Circus also means performing: stepping into the ring, doing your thing and getting applause! A successful experience is very important for this group.
Due to the success and good cooperation, we started in 2007 a weekly circus cooperation in Fabota, which is still going strong. This circus project has since changed its name to circus Atobaf! Every Friday the children are offered a wide variety of circus skills, in the circus room of the children's project itself. Also, every year we organize a circus camp 1 with 2 this core group, where we work towards a performance at the end of the week. This little show has also been performed at events. In 2012 they even performed in Leuven in scene, where they did a fantastic job in front of a large audience.

We would like to go further with this project. We want the children from Fabota to come to the regular classes of Cirkus in Motion. We have noticed that attracting children from especially, vulnerable groups in a regular leisure organisation not that difficult. To retain them, on the other hand, is not easy. Often the children do not feel at home among the other children (especially with children from middle class families). Creating enthusiasm in the children, motivating them and making them feel at home in the project : that is the challenge!

For photos and stories can be found on the following websites:
– Cirkusatobaf on Tumblr
– Community Center the Ann
– our brochure: Circus on stilts 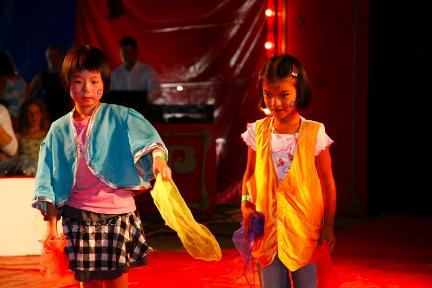 In 2006 we worked together with Fabota (see above) on a big circus project for children and young people from vulnerable groups, which got the name De Karavaan. It was hard work, but it turned out to be a great success.

This circus project had the objective to offer the children in the various Leuven neighborhood projects a creative outlet. The project wanted to instill more confidence in children, introduce them to new challenges and learn them to deal with other people.

200 children and young people of Fabota, De Trommel, St Maartensdal, Casablanca, Leren Ondernemen, Okan, The Tube and integration services were immersed for months in the circus world. Within their own organization, they were visited twice by a circus teacher and with their counselors and leaders they continued to practice diligently on the trapeze, unicycle, with their diabolos ...

During the summer vacation they were invited for a week in the big circus tent Circus Picolini in St. Jacobs Square. There they received even more circus workshops and worked under the guidance of our instructors on a homemade circus performance that was greeted with enthusiastic applause from the audience in Leuven! After the very positive assessment of The Caravan we decided not to drop this concept. And this is what we did: during the summer of 2007 we are expecting 100 children from the same neighborhood projects to work on a performance that will launch our International Youth Circus Festival !