In 2016 creates a whole new city circus festival which the city and Cirkus in motion intensive cooperation. 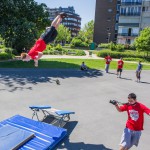 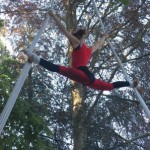 As in previous years remains a strong partner within the circus insurence- and street theatre projects. So there was in 2013 another edition of the festival city circus Circus & and Co. For this purpose, we work closely with Leuvenement vzw. In addition, we put our shoulders under a decent circus programming in the existing culture houses. For the time being, we only work together with 30CC. We give advice about the programming of circus performances, but also create performances ourselves such as the Children's Festival Red Dog. In 2013 we strengthened the bond with the Leuven cultural center, but we also to involve other parties (BV. PIECE) to join us to look into the possibilities to offer circus programs. This is important for the recognition of circus as a fully fledged art form, between the other (stage)Arts.